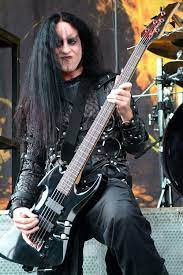 Cradle of Filth bassist Dave Pybus (born 4 June 1970 in Heckmondwike, West Yorkshire, England) is a former member of the extreme metal band Cradle of Filth. Pybus is best known for his work with Cradle of Filth. Pybus’s first band was named Anul Death (1988–91), which subsequently changed its name to Darkened. Pybus’s second band was called Darkened (1992–93). From 1990 until 1994, Dave worked as a graphic designer for Peaceville Records in Los Angeles. A number of recordings from that time period bear his name, including Darkthrone’s A Blaze in the Northern Sky, Autopsy’s Mental Funeral, My Dying Bride’s As the Flower Withers, Turn Loose the Swans, and My Dying Bride’s As the Flower Withers. Working with bands such as Vital Remains, Pitchshifter, Therion, Anathema, GGHFH, Kong, Paradise Lost, Banished, Pentagram, Ship of Fools, At the Gates, and others is also a possibility (first 3 albums). Around 1993, Peaceville secured a distribution agreement with Caroline, where Dave and Lyle Preslar collaborated for more than a year on several projects. The year 1991 saw Dave launch Dreambreed, a band in which he sang and played guitar, among other things. In 1995, they issued a six-track Mini CD, which was heavily inspired by the Misfits at the time. The band Dreambreed, which at the time included Duncan Patterson of Anathema, remained together until Dave left to join the band Anathema on bass guitar in 1998, where he has remained since. He remained with Anathema until 2001, performing on two albums – Judgement (1999) and A Fine Day to Exit (2001). After that, he sessioned and subsequently joined Cradle of Filth, replacing bassist Robin “Graves” Eaglestone, who had left the band due to personal reasons.

Lets check out updated 2021 Dave Pybus Net Worth Income Salary report which is given below :